Trenbolone enanthate is one of the most popular anabolic steroids available today. The Trenbolone base and enanthate ester make it a long-acting injectable that calls for convenient and infrequent dosing. It is an injectable anabolic steroid that is used in both veterinary medicine and sports, and most men prefer to incorporate it into cutting cycles so they can maintain lean muscle mass while burning fat.

What Is an Ester?

An ester is defined as “an organic compound made by replacing the hydrogen of an acid by an alkyl or other organic group.” Different esters can alter the function of the parent molecule, and this is true even of a Trenbolone base. Some esters alkylate a compound so it can survive being processed through the liver and remain bioavailable; others have esters attached to them that are designed to lengthen the parent molecule’s half-life. Many different steroids have more than one ester, with testosterone being a common example. There are nearly a dozen very popular esters, and each one has its own unique set of benefits.

Different esters have different weights, and in almost all cases, these weights are affected by the number of carbon molecules in the ester chain. Your body can break down and process an ester with only one or two carbons (or no carbons at all) much more quickly than an ester with six or seven carbons, for example. This means that, when it comes to anabolic steroids for performance enhancement, the main consideration with esters is half-life.

Trenbolone Base and Veterinary Esters

When used in a veterinary setting, there are two primary esters attached to the Trenbolone base: acetate and hexahydrobenzylcarbonate. Each of these provides a different use in veterinary medicine. For example, Trenbolone acetate, also known by the brand name Finaplix-H, may be used to facilitate rapid weight gain and improve nutrient absorption. Trenbolone hexahydrobenzylcarbonate, known by the brand name Parabolan, has a much longer half-life, which makes it more suitable for human use. Parabolan is only used in veterinary settings infrequently.

What Makes the Enanthate Ester Different?

There are four common esters you will find attached to a Trenbolone base, and each one is slightly different from the next. These esters may have more or fewer carbon or oxygen atoms, making them heavier or lighter. The lighter the Trenbolone ester, the more potent it will be milligram-for-milligram. The chart below shows these differences.

While it may seem as if a lighter ester is always the better choice since these esters deliver more hormone, that is not the case. The half-life of the compound is also affected by the ester; those with fewer carbons have far shorter half-lives than those with more carbons. This means that while Tren Ace is the strongest, you’ll need to inject it every other day for the best results. On the other hand, if you choose an enanthate ester for your Trenbolone base, you’ll discover that the potency is much the same, but you may only need to inject it twice per week due to its additional carbon atoms.

The Benefits of a Trenbolone Base and Enanthate Ester

With all the above information in mind, you can better choice a Tren ester to suit your needs. When you buy Trenbolone online or otherwise, you’ll find it readily available in two forms over all others – enanthate and acetate. Each of these has its own unique set of benefits.

Differences in Side Effects

The side effects associated with any ester attached to a Trenbolone base are very much the same. Each ester’s anabolic/androgenic rating is only negligibly different, as well. Because Tren does not aromatize, men do not have to feel concerned about estrogenic side effects like Gynecomastia on-cycle, regardless of the attached ester. In fact, the only thing to consider when choosing an ester is the product’s half-life and what will happen if you experience unwanted Tren side effects.

The half-life of Tren Ace is roughly 24 to 48 hours, which means that in as little as one day after you stop using it, half of it has already exited your system. Should you experience unwanted side effects and cut back your dose – or even stop Tren altogether – these should begin to subside very quickly. On the other hand, with the enanthate ester attached to the Trenbolone base, the half-life climbs to about five days, which means it will take longer for your body to “flush” the steroid. If you experience severe side effects in this case, it will take longer for those effects to dissipate. 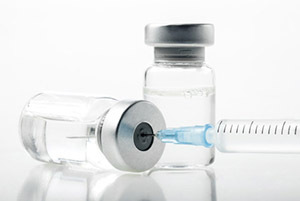 Although a Trenbolone base doesn’t aromatize regardless of the attached ester, it does suppress your body’s natural production of testosterone. After your Trenbolone cycle ends, if you fail to execute post-cycle therapy with a compound called a SERM, you will likely experience low-testosterone symptoms. What’s more, due to hormonal imbalances in your body, you may even experience estrogenic side effects. That’s because the lack of testosterone allows more free estrogen to bind with receptors, and this can cause bloating, Mood swings, and gynecomastia.

You will need PCT with any Trenbolone base, regardless of the ester, but the ester will dictate when you should start that PCT. For example, if you’re using all short-estered compounds, such as a Trenbolone acetate and testosterone propionate, you will need to start your SERM right away – three days after your last cycle day. On the other hand, if you’re using a longer-estered steroid, such as Trenbolone enanthate and Testosterone enanthate, you would wait 10 days to begin your PCT.

As you can see, the Trenbolone base produces the same effects, both positive and negative, regardless of the ester to which it is attached. Your primary consideration when you buy Trenbolone should be the half-life. Remember that Trenbolone enanthate (Tren E) has a much longer half-life than the acetate version, which means you can inject it far less frequently, but you will find that it takes longer to experience results.