Clenbuterol (Clen) is one of the world’s most popular weight loss drugs. It is synthetic, and it belongs to a class of drugs vknown as sympathomimetics. It is a stimulant; it is not an anabolic steroid. However, when used alongside anabolic steroids such as Anadrol or Winstrol, one can achieve a lean, defined, muscular look. Due to its amazing fat burning properties, this drug is also popular among celebrities. Clen helps you eradicate adipose tissue (surplus fat) because of its thermogenic properties. It also boosts the body’s metabolism and aids in the conversion of carbohydrates, Proteins and fats into useful energy.

Clenbuterol is renowned for its interaction with the Beta-2 receptors, which is why Clenbuterol is referred to as a Beta-2 receptor agonist. This means that it is used to stimulate the beta receptors in fat and muscle tissue in the body, causing them to dilate. It is used to treat respiratory conditions such as asthma because it acts as decongestant and a bronchodilator to facilitate breathing.

Whether you’ve used Clen in the past or it’s your very first time, starting dosage and cycle guidelines are the same. For men, a great starting dose is 40mcg per day, and for women, the ideal starting dose is 20mcg per day. Though these doses are considered quite low by most standards, it’s important to remember that the human body quickly develops a tolerance to Clenbuterol’s effects, and gently titrating the dose will allow users to reap the benefits more effectively.

The maximum recommended dosage for men is 140mcg per day, while the maximum recommended dose for women is 100mcg per day. Some have pushed these limits without any harsh side effects, but it’s typically recommended to stay below these points as the risk starts to outweigh any potential benefits. Most users follow a two-weeks-on/two-weeks-off cycle, which allows them to carefully control their bodies’ tolerance to Clen and continue to enjoy the thermogenic benefits. The goal is to start with the lowest dose, then work your way up to the maximum dose by the end of the first two weeks. Afterward, you’ll take a two-week break, then start the cycle over again.

The table below serves as a quick reference guide for determining minimum and maximum doses for men and women.

Does Clenbuterol Work for Everyone? 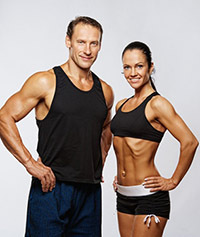 As every individual is different and unique, Clen will not have the same effect on everyone. There are some who claim that the drug does not work, but in many cases, this is not a failure on Clenbuterol’s part; it’s the user’s failure to follow diet and Exercise guidelines. When used properly and if combined with various types of anabolic steroids, this compound provides the same results to almost everyone. It boosts your base body temperature ever so slightly, thus facilitating fat loss, but only when users combine it with a strict diet and exercise regimen. With a higher body temperature comes higher blood pressure and metabolism, which increases caloric expenditure and makes it easier for users to Lose Weight.

As all experienced bodybuilders know, taking the supplement alone is not enough. You must be a dedicated, motivated, and willing to alter your diet to ensure you are consuming the right number of calories and macronutrients. You must also perform enough of the right types of physical activity to fully realize the powerful effects of Clen. By following the alternating Clenbuterol cycle guide, you should see and feel the difference in as little as one week.

Many bodybuilders have claimed that they achieved amazing Clenbuterol results in very little time after using Clen. It is possible to lose up to 15 pounds in only two weeks by taking Clenbuterol appropriately and combining it with a good diet and plenty of exercise. When combined with anabolic steroids such as Winstrol or Dianabol, you can expect to achieve even better results. It is also commonly used as a weight loss drug due to its ability to burn up fat when used appropriately. Consequently, Clen is commonly used during a bodybuilder’s cutting phase to melt away body fat and enhance the appearance of muscle tissue.

What to Expect when Using Clenbuterol

Clenbuterol (Clen) is a stimulant drug. It’s a bronchodilator, which means it helps to open airways for those who have asthma and other similar conditions. Most bronchodilators, including ephedrine, albuterol, and clenbuterol, are known for their stimulant properties. Although Clenbuterol was not originally prescribed to patients to help them lose weight, many patients who were using it to treat asthma and similar conditions noted that they felt more alert, and some of them even lost a minimal amount weight without changing their diet and exercise.

One of the most notable qualities of Clenbuterol is the fact that you’ll develop a tolerance to it quite quickly. This means that your body is likely to acclimate over time, rendering the compound less effective. The best way to maximize the benefits of Clen, all while reducing the risk of side effects, involves using a fluctuating dose. This means starting with a small dose, working your way up to the maximum recommended dose (or the highest dose you can tolerate safely, whichever is lower), and then gradually working your way back down. This way, your body does not acclimate to the Clenbuterol and its thermogenic properties will continue to benefit you.

Clen users experience things like jitters, sleeplessness, and a faster heart rate – things that are also associated with the consumption of Caffeine. In fact, the side effects are very similar, but they’re often quite tolerable if dosage guidelines are followed. Clen should be used in short cycles lasting about two weeks, but these cycles can be repeated as needed, along with diet and exercise, until users reach their goal weights or body fat percentages. However, some people do not tolerate it as well as others, so it may not be the best choice of weight or fat loss supplements for everyone.

Where can You Buy Clen?

Clenbuterol (Clen) has been banned in many countries for both human and animal consumption. However, it is legal in some countries via a prescription from a doctor to be used only as a respiratory aid. The ingredients you’ll need for a full Clen cycle can be purchased online, however. Before you buy Clenbuterol online, it’s a good idea to consult your doctor. This way, you can ensure that you have no health conditions or concerns that would prevent you from using it safely.